The region of Pilaros in northern Kefalonia could be said to justify its existence purely as a setting for the enchanting beach of Myrtos.
However, the sheer beauty of its countryside, coupled with a long and varied history, makes this area unique.
The birthplace of Marinos Antipas, this untamed and delightful area stretches from the bay of Myrtos across to the shores of Agia Efimia, nestling between the mountains Saint Dinati and Kalon Oros. 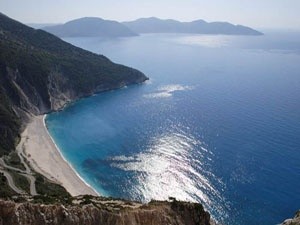 Here are well-kept villages, where time rolls by slowly in the traditional cafes of another era, as well as designated Areas of Outstanding Natural Beauty (NATURA).
One coastline faces the island of Ithaca, which can be seen equally well from the beach at Agia Efimia as from higher up the mountainside at the Monastery of Themata.
The opposite coastline looks out over the open sea as it vanishes over the horizon, leaving behind the spectacular colors of the waters at Myrtos.
Despite being in competition with the two beautiful coastlines, the inland areas have much to offer the visitor.

The villages of Drakopoulata, Antipata, Makriotika, Dendrinata – the “other” Pilaros- are impressive as much for their natural beauty as for the part they play in maintaining the traditions of the area.

The Municipality of Pilaros is bordered by two mountains, Agia Dinati (1.131m) and Kalon Oros (900m), and two shorelines, Agia Efimia to the east, and Myrtos to the west. It lies 34 Km from the capital of the island, Argostoli. Agia Efimia, the administrative headquarters of the municipality, is just 9km from Sami, the main port of entry for the entire island.
Historicaly, Pilaros was (and still is) of particular importance, beeing the passage through to the north of Kefalonia in ancient times. The name Pilaros comes from the ancient word “piloros”, meaning “the guard of the gate”.

During classical times, it was part of the city-state of Sami. The remains of fortified towers in Agia Efimia and Drakopoulata testify to the role of Pilaros in guarding the entrance and exit to its fertile valley.
The medieval period was a time of change and reorganization, while later during the Frankish Occupation and Venetian rule, populations were moved around according to the various colonization policies and the demands of the feudal system. This led to the creation of new settlements.
During the period of British domination, the inhabitants of Pilaros played a great part in the radical fight for union with Greece. The locals also participated in the revolution of 1821, with supplies beeing sent to the rebels in mainland Greece from the port of Agia EFimia. Following the Union of the Ionian Islands with Greece (1864), Pilaros played an important role in the political, social and economic development of Kefalonia, while many people from this area have distinguished themselves in recent history. One of the most notable of these was Marinos Antipas (1872-1907), with his unarguably significant contribution to the spread of the first socialist ideas in Kefalonia, and in promoting the agricultural movement in Thessaly.
At the end of the 19th century and at the beginning of the 20th, many local inhabitants turned to the sea while Agia Efimia became a trading centre. A large proportion of the population was engaged in agriculture and cattle-farming. Cheese-makers from Pilaros earned a name for themselves not only in Greece, but also as far afield as the Balkans and southern Italy.
The Second World War and the Italian-German occupation, along with the 1953 earthquakes, dealt a hard blow to the development and growth of the region as these events were followed by mass emigration.
Over the last few decades, Pilaros has entered into the new phase of social and economic growth that has characterized Kefalonia as a whole.

ARCHAEOLOGICAL SITES
The importance of Pilaros in ancient times for northern Kefalonia has been proved indisputably by the existence of the fortified towers at the two opposite ends of the valley. Just outside the town of Agia Efimia, the ruins at Palatia are particularly impressive; between the enormous stones of the walls there are stunning views of the valley and the eastern coastline.
There is also a mosaic floor belonging to a Roman villa in Arhaiotiton Street in Agia Efimia.
Throughout the region of Pilaros there are well-preserved, pre-earthquake buildings of great architectural 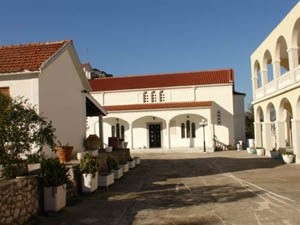 THE MONASTERY OF THE HOLY VIRGIN MARY, THEMATA
The Monastery was built at the end of the 10th century and is located on the mountainside of Agia Dinati, among an enchanting forest of ancient holm oak trees, known as “Pournarodasos”. The views from the Monastery are spectacular, as it is a wonderful vantage point for seeing both Ithaca and the Ionian Sea.
The old carved wooden icon-screen is kept in the church, along with many old icons. The most important of these, is “The Virgin Mary of Themata”, which is carried in procession the Tuesday after Easter when a hugely popular festival is held in nearby Pournarodasos.

The Monastery of Themata can be reached along a wide tarmac road that enables the visitor to stop on the way up to admire the amazing views.
The church of Agia Efimia in the town itself is an important place of worship in Pilaros. Each year on 11th July Saint Efimia is commemorated with a procession of the icon and one of the most popular and well-attended festivals on the island.
There are many churches of remarkable cultural and architectural value in Pilaros. Among these are: the Monastery of Anatolikou (or “Antelikou” as the locals call it), which is dedicated to the Assumption of the Virgin Mary; the church of Hypapanti; and the church in Sia. The Monastery of Anatolikou was built in 1194 and the church you can see today is one of the few buildings in the area to have survived the 1953 earthquakes.

VILLAGES
Pilaros is full of picturesque villages of varying sizes, each one with its very own local-colour and history.
The traditional village of Drakopoulata is of particular interest with its many exceptional pre-earthquake houses. Makriotika is the largest village in the area and has wonderful views of the valley and sea. In Potamianata, next to the statue of Marinos Antipas, you can see a pre-earthquake windmill, which is one of the many mills that existed in the region in the past.
The remains of the 33-metre-high bell-tower of Sotiras are located in Ferentinata, while in Dendrinata there is an old, carved, wooden icon-screen of great value in the church of Saint Konstantinos.
Divarata, above Myrtos beach, lines the road that leads to Erissos, and offers fine accommodation and traditional tavernas.
Each village boasts quaint, traditional architecture alongside modern facilities, all built of “Falari” stone. That’s why a tour around the inland areas of Pilaros offers just as many pleasant surprises as the coastlines. 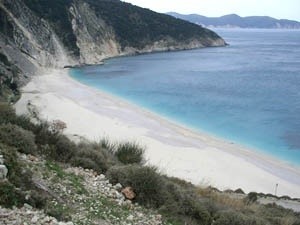 You will never have seen a beach more lovely than Myrtos.
If a picture is worth a thousand words then a picture of this particular beach, with its blue-green waters, is worth a whole volume of words.
But Myrtos is more than a picture, even if it has been the island’s “trademark” for many years now.

It is a beach that you have to see for yourself to get a true understanding of what it is really like.
What is Myrtos exactly? It is a sea of infinite blues and turquoises that defy description, vying for supremacy with the rocky coasts of western Pilaros and the dazzling 800m-shore of white sand and pebbles.
Your first sight of Myrtos from the road above literally takes your breath away. The road down to the beach passes through a lush ravine, allowing you frequent glimpses of the beauty that awaits you.
Have a swim in the crystal clear waters, or lounge on the sun-drenched beach.
Myrtos has been awarded the Blue Flag for many years now. In 2003-2004, it won the title of Best Beach in an international competition on the website www.thalassa.gr .

The beauty of the beaches of Pilaros doesn’t end with Myrtos, however.
The clear waters of the beach at Agia Efimia offer an alternative for those who wish to have swimming and playing in the waves and the sun.
In an area called Giros, along the coast from Agia Efimia, sun-lovers find their own paradise in the crystal clear waters of the white sandy beaches along the rocky coastline.
Along the whole length of the road leading from Agia Efimia to Sami, right next to the road itself, are “gems” of beaches; innumerable small sandy beaches with completely transparent water, hidden among the rocks which are a feature of this coastline, which allow the visitor to enjoy swimming from his own “private” beach. The flat stones along the coast are ideal for diving and sunbathing.
There are also many bays accessible only from the sea, which are excellent for swimming and diving.
A Diving School in Agia Efimia offers courses and organizes occasional group diving trips in the area.

ENVIRONMENT
Mount Kalon has been designated as a NATURA Region (code number GR2220001) according to a directive from the European Union NATURE 2000 programme, which aims to built up a register of “ecological paradises”.
The area covers a total of 2.566 hectares and is considered an important ecological site because of the variety of Mediterranean species found there.
The vegetation consists mainly of plants such as lentisks, holm oak and arbutus, while in some regions a deep red species of peony can be found, as well as entire meadows of various orchids and a wide variety of wild flowers.
Mount Kalon has also been recognized as an important conservation area for the bird populations of Greece.
A great deal of cattle-farming went on here in previous centuries, and Mount Kalon is home to many stone cottages of a style peculiar to the region.
Environmental preservation and conservation are of immense importance in Pilaros, which is an area of great natural beauty.
The wind farms, both on Mount Agia Dinati and in Imerovigli on the border between the Municipality of Pilaros and the Municipality of Argostoli, show the great strides made in the development and use of alternative sources of energy.
The Voluntary Environmental Team for the Protection of the Environment of Pilaros is involved in forest conservation during the summer, as well as taking part in activities such as tree-planting and the cleaning up of beaches and public areas.