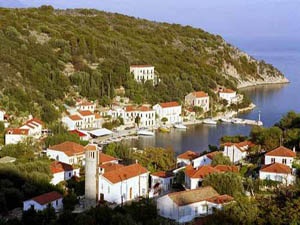 Kioni
A traditional Ionian village with a picturesque harbour, which provides mooring for dozens of yachts in the summer, Kioni was also a place of shelter and the operational headquarters for pirates in the past. At the entrance to the harbour there are the remains of three derelict windmills.

Karaiskaki’s House
In Kioni, on the right of the harbour, there are a few remains of the stone house where the hero George Karaiskaki lived up until the revollution of 1821.

Vathi The capital of the island, Vathi, is quite spectacular with its traditional ionian houses built along the shores of a stunningly beautiful natural harbour. Overlooking the tiny island of Lazoreto, the town was designated an area of traditional dwellings in 1982.

The Cave of the Nymphs
In this cave, which is called “Marmarospilia” by the locals, there are two entrances: one for the gods and one for the mortals. The cave boasts marvellous stalactites, and it was here that Odysseus is supposed to have hidden the gifts he received from king Alkinoos of Feakes.

Palaiohora
A path from Perahori leads to the medieval ruins of Palaiohora, where you can find churches housing remarkable Byzantine frescoes.

Alalkomenes
On the top of Aetos hill is the ancient “acropolis”, which the locals call Odysseus’s Palace. It may be the site of the ancient city of Alalkomenes or possibly the “State of Ithaka” mentioned by Aristotle.

Pilikata
The city of Odysseus was supposedly siruated in Pilikata, near the village of Stavros . According to Homer’s description of the city, it had views over three seas and was surrounded by three mountains. Today, the Archaeological Museum of Stavros houses the finds from the Mycenean and Corinthian periods unearthed in this area. 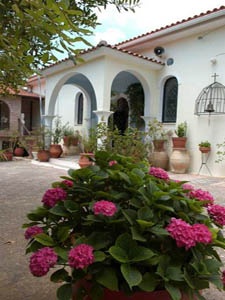 The Church of the Virgin Mary (Metropolitan)
The church of the Virgin Mary in Linobrohia, as it is called, was built in 1800 on the site of a small chapel, which was extended to satisfy the needs of parishioners. The present church houses an intricately-carved wooden icon-screen, a fine example of post-Byzantine art crafted in 1793 by Metsovitis, plus an imposing bell-tower dating from 1820.

The church of the Virgin Mary in Anogi, located 500m above sea level, is one of the largest, most important and ancient churches in the Balkans. It is an impressive size- approximately 30m by 10m- and was built in sections 700 years ago. The interior of the church is remarkable, for it’s Byzantine-Style murals, which led to the church being granted a Preservation Order by the Ministry of Education and Religion in 1959.

Loizos Cave
This cave was a place of worship during the first Hellenic civilization and is located in the bay of Polis below Stavros, near the ancient sunken city. All the finds from the excavations carried out in this cave, which is now below thw waterline, testify to the fact that this harbour was used From the first Mycenean era right up to the Hellenic and Roman eras.

The Bust of Odysseus
Read the “Odyssey Wish” inscribed on the bust of Odysseus, which is in the middle of the small park in the square in Stavros.

Anogi – the “menir”
Huge stones called “menir” are scattered around the village of Anogi.
The largest of these oddly-shaped rocks is called Araklis and is located a short way from the houses of the village, standing 9m high on a wider, flatter rock that acts as its pedestal.
The church of the village was built in the 12th century and houses remarkable frescoes and a Venetian bell-tower. 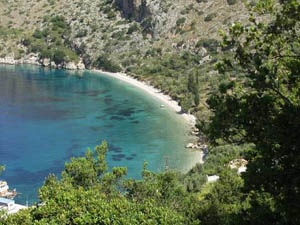 Beaches
Aetos
In the middle of the island at the end of the bay of the same name, you will find the sheltered beach of Aetos, which is ideal for swimming.

Dexia or Dexa
Opposite the main entrance to the harbour near the town, following the road leading to Aetos and the north of the island, you come to the beach of Dexa. A small beach with crystal clear waters, it has been awarded the Blue Flag.

Loutsa
At the entrance to the harbour in Vathi, on the left hand side bellow the Venetian cannons, lies the beautiful sandy beach of Loutsa.

Mnimata
The beach of Mnimata is located in the bay of Skinos, near the town.

Skinos
Skinos beach is situated 3Km from Vathi in a bay of the same name.

Gidaki
The spectacular beach can be found north of Filiatro. Gidaki is renowned for its natural beauty and is well-known as one of the most beautiful beaches in Greece.

Filiatro
A little further along the coast is the delightful beach of Filiatro in the bay of the same name, where both locals and visitors go to enjoy water sports and relaxing in the peace and quiet.

Sarakiniko
To The east of Vathi is the gulf of Sarakinikos with a beach where the visitor can relax in the crystal clear turquoise waters.

Antri
Here you can find a small but beautiful beach in a sheltered cove.

Piso Aetos
Directly opposite Aetos, on the south-western coast of Ithaka, is yet another beautiful beach.

Aspros Gialos
On the west side of the island, near village of Agios Giannis, is the beautifully clean beach of Aspros Gialos. Here the calm, blue sea is set against the green backdrop of Mount Niritos, which provides an idyllic setting favoured by visitors . A 3km road leads from Lefki to the village of Agios Giannis and Aspros Beach. Paths fron Lefki lead to numerous small sandy beaches, such as Militera and Koutoupi.

Poli (“City”)
Bellow Stavros, is the beach of Poli, which is also a sheltered harbour, offering mooring for local fishing boats. In the depths of the bay of Poli are the ruins of an ancient sunken city.

Ammoudi
Next to Poli harbour lies the small sandy beach of Ammoudi, hidden from view and accessible only from the sea. A 10-minute boat ride will bring you to this heaven of peace and tranquility.

Keramargio
On the western side of the bay of Afales, just beyond Perivoli, this tiny pebble beach is completely isolated.

Perivoli
Difficult to get to, but well worth the effort, the scenic beach of Perivoli with its crystal clear waters is usually deserted.

Kouloumi
After a 100m walk over a rocky coastline to the west of Afales beach, you come to the beautiful beach of Kouloumi, which is accessible by boat from Poli, Frikes or Kioni.

Afales
Taking the road from Platrithia (“the lakes”) to Afales, you travel through a paradise of tropical vegetation until you reach the magical beach in Afales Bay.
This is a pebble beach which leads to two more deserted beaches hidden by the rocks, ideal for those who want peace and quiet.
Further round the bay there are beaches only accessible from the sea.

Kathisma
Kathisma is a very small isolated beach, opposite Afales beach, accessible by boat from Frikes, Poli or Kioni.

Platis Ammos
Platis Ammos is a broad and beautiful beach with both sand and pebbles edged with the clear waters.

Sikia
An ideal sandy and pebble beach for getting away from it all, Sikia is accessible by boat and provides shade throughout the day.

Voukenti
A small pebble beach with clear waters boukenti is accessible by boat.

Alikes
Alikes is pebbly with a small mud-pool just 10 metres behind the beach, which was used in the past for mud-baths.

Tria Moudia
These three pebble beaches run along the shore of a small cove close to Frikes and attract visitors who want to get off the beaten track. They are accessible by boat from Frikes, Kioni or Vathi.

Vathiammoudi
Close to the port of Frikes is another small beach which is accessible by boat.

Limenia and Pera Limenia
Next to Frikes is the beautiful beach of Limenia, with the olive grove just behind providing shade for visitors. A little further on there is the small beach of Pera Limenia, which is accessible by boat or via a path from Frikes.

Kourvoulia, Piso Kourvoulia, Tsitsimida, Plakoutses
Small, popular beaches running the length of the coastal road from Frikes to Kioni, their cool waters are ideal during the hot summer months.

Mavronas
A small pebbly beach accessible from Rachi of Kioni, the bay itself is a sheltter for small boats and yachts.

Kioni
Kioni’s small beaches and the clear water of the harbour attract visitors throughout the summer.

Kritami
To the south of Kioni, beyond the small cape of Ai Lias with its tiny church, a small beach with beautiful pebbles and blue waters is waiting to welcome visitors.

Kotsifi
A narrow beach running the length of the coastline between Ai Lias and Aetos, Kotsifi is ideal for getting away from it all.