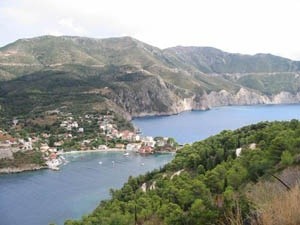 The municipality of Erisos covers the northern part of the island and is well-known for its unique beauty.
The road network joins all the villages of the region, passing through idyllic countryside and linking up with the main roads of the island.
Driving along the high mountain roads, you have a stunning view of the small harbours and bays far below you.
Along the way, you can visit the famous village of Assos, the capital of the island in 1593 and main harbour of the region, with its 16th century Venetian castle and old rural prisons, which were in operation untill 1953.
View photos of the region

view photos of the region

The road to Fiscardo takes you near the Monastery of the Virgin Mary (Paliohersos), which dates from 1600 and is situated 2Km from the village of Defaranarata. The church holds a feast day on 8th September and it houses an icon called “Platitera of the Heavens”.
Along this road you will find very beautiful, small villages that are characterized by their exceptional pre-earthquake architecture, since many of the buildings were not destroyed by the 1953 earthquake.
FISCARDO

Fiscardo, an old fishing village whose houses remained intact after the 1953 earthquake, is today one of the most famous tourist resorts in Greece.
Providing shelter and mooring for many boats, it is one of the best-known areas for marine tourism at both a domestic and international level.
Roberto Guiscard, the Norman crusader for whom the village was nameed, reached here in 1085 with the intention of occupying the island, and stayed here untill his untimely death.
Most of the region’s manor houses date from the Venetian occupation.

Fiscardo is famous for its quaint streets as well as its cosmopolitan character. It was the birthplace of Nikos Kavvadias, a poet-cum-sailor who wrote about the sea.
It is surrounded by picturesque villages, beaches with crystal clear waters and the splendid cypress groves of Evreti. To the east, the villages and hamlets, with their view of the island of Ithaka, are testimony to the developments that have taken place and will continue to do so in the future.
The whole region of Erissos is widely-known as an area of outstanding natural beauty.
Fiscardo itself is divided up into smaller areas: Apolitos (where the ferry comes in), Larni (near Spiliovouno), Kaminakia, Zavalata and Foki.
In the area surrounding Fiscardo you can see many traditional and extremely beautiful villages, such as Antipata, Germenata, Psilithrias, Magganos, Katsarata, Matsoukata, Tseledata, Barzoukata, Tzamarelata, Agrilias, Halikeri and many others. 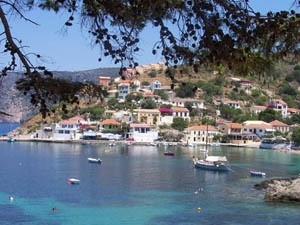 One of the most picturesque regions of the island and an extremely popular resort, which plays host to many tourists in summer. Shaped liked a semi-circle round the bay of Assos, the beautiful beach allows those who love the sea a chance to cool off.
The village streets are lined with beautiful houses and gardens full of flowers, presenting a picture of part of the island untouched by the modern world.

There are however, all the modern facilities a tourist could wish for, with shops and tavernas located in the central square under the branches of the plane tree and oleanders.
The beautiful castle of Assos, with its panoramic view of the Ionian Sea and its long history, is the region’s jewel in the crown. Construction began in 1585, following a request from an envoy from Kefalonia to the Venetian authorities, asking for better protection of the island.
This mound was suggested because of its steep slopes and relative invulnerability to attacks from the sea.
Assos became the capital of the northern part of the island in 1593, and the castle we can see today is perfect example of the Renaissance art of fortress building.
The castle was used as a rural prison until 1953. You can still see the ruins of the 2Km castle walls, the remains of the residence of the Venetian Governor, barracks and the church of Saint Mark. Restoration work is beeing carried out at the present time.

AGRILIA
An area which takes you back in time. The age of the houses alone shows you how old the village really is.
It is located in the north-west of the island, bordering on Maggano, from where a road leads to the busy fishing village of Fiscardo, Tzamarelata and Halikeri.
The houses were built after the earthquake, although you can still see some abandoned houses from before 1953. There is a wide variety of lush green vegetation to tempt nature lovers, who will enjoy the enchanting landscape of olive trees, cypresses, and lemon and orange groves that cared for by the few residents of the area.

LARNI REGION
Here you can find the “Throne of Queen Guiscard or “Fiscarda”- a carved niche in a rock with intricately carved steps and seats. It is believed to have been a grave or an ancient place of worship.

SPILIOBOUNO
To the west of Fiscardo, a part of a Cyclopean wall which was built in ancient times for defense purposes. 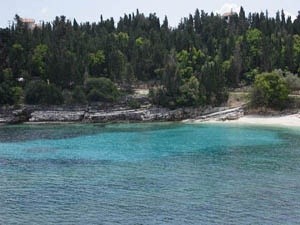