Situated on the east coast of Kefalonia, the Municipality of Sami has a population of 2.297 residents and covers approximately 32000 acres in total. The town of Sami is the major port of the island, and the municipality stretches along a pretty coastline, which is backed by attractive scenery.
The beaches of Antisamos and Paliouras are well-worth visiting, as is the small lake of Karavomilos, through which some of the underground waters coming from Katavothres flow before going into the sea 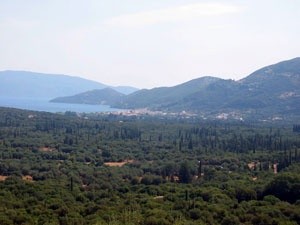 Sami is a region known for its fascinating geological phenomena. All in all, 17 caves and caverns have been discovered, and this makes the area unique in Greece, and of great interest to scholars of prehistory. Today, two caves can be visited by the general public: the lake and cave of Melissani in Karavomilos, and Drogarati Cave near the village of Haliotata.
The monastery of Agrilia is perched on a hill above the emerald green beach of Antisamos and looks out towards neighbouring Ithaca, and the Patraikos Gulf in the distance. The scenery is stunningly beautiful, with Mount Ainos and its lush vegetation of dark green fir trees providing a dramatic backdrop for the monastery.

Apart from the town of Sami, the municipality is made up of many villages and hamlets, each with its own attractively-painted houses full of flowers.
Whenever you go in the municipality, the beauty of the Kefalonian countryside never ceases to surprise you.
The region of Sami is certainly endowed with great natural beauty: the lush green countryside, crystal clear spring waters, picturesque villages and an abundance of caves and lakes, all added up to a landscape that will enchant you. 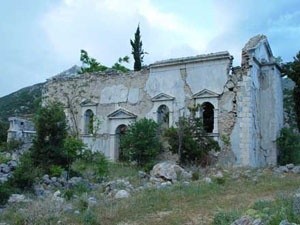 Sami has been inhabited since the prehistoric times. It was first mentioned in Homer’s epics as part of the kingdom of the Kefalonian ruler, Odysseus, when Kefalonians took part in the Trojan War. Remains of prehistoric dwellings have been found in the region, and the hill of Vigla is thought to have been the site of the mycenean citadel.
In the 5th century BC, Kefalonia was devided into four autonomous “city-states”- Krani, Sami, Pronni and Palli.

A rivalry existed between the four, each having a strong citadel; the surviving walls of Sami’s citadel bear witness to this and show Sami to have been a well-organised and flourishing city.
During the 2nd century BC, Sami attracted the interest of the Romans because of its strategic position. In 189 BC they attacked the island with the aim of occupying it. Of the four city-states, only Sami put up a strong resistance; the siege was merciless and lasted four months.
Sami surrendered in January 188 BC, after special siege-breaking machinery was brought in from Ambrakia. The citadel was pillaged and the inhabitants enslaved. Because of its strategic position, the Romans reorganized the town, and later on it became a major stopover point on journeys from Greece to Italy.
Archaeological finds testify to a great deal of Roman building work in the area.
Pirate raids during the 5th and 6th century AD, along with the catastrophic earthquakes and various other factors, contributed to the gradual decline and final abandonment of the city 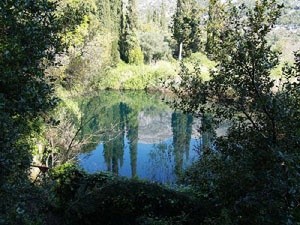 Avithos Lake
Within the boundaries of the Municipality of Sami lies Avitkos Lake (also known as “Big Akoli”), located on the road from Pirgi to Poros, near the village of Saint Nikolaos.
The name means “bottomless”, and its waters are used in the water supply of the region.
The landscape around the lake is another sample of the island’s beautiful countryside, with its rich flora and rare fauna. 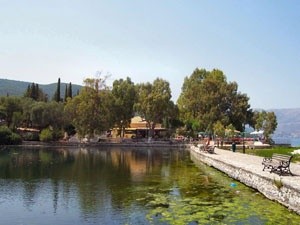 Karavomilos Lake
The waters from Melissani Lake run through the calm, clear waters of Karavomilos, under the waterwheel, and out into the sea.
The part around the Karavomilos Lake leads you through lush vegetation and affords you delightful views of the lake and the sea.
There is also a recreation area in the shade of the tall eucalyptus trees which edge the beach. 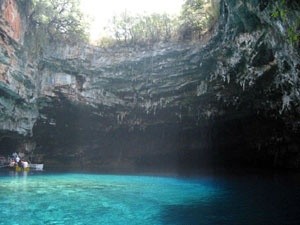 Melissani Lake
A 3,5 km underground cavern opens into a cave 40 m. wide and 36 m. high.
Part of the roof has fallen in, and the sun’s rays shine through the opening, lighting up the walls of the cave and creating incredible turquoise colours in the water; a magnificent sight, especially at midday.
The lake is awash with 20.000-years-old stalactites and stalagmites, and you are guided around the lake and the walls of the cave in small rowing boats.
On the small island to the right of the lake, formed by the roof collapsing, the archaelogist Marinatos discovered a sanctuary dedicated to the god Pan; the few but significant artefacts he unearthed can be seen in the Archaeological Museum of Argostoli.

Monastery of Agrilia
An 18th century monastery near Sami, built on a hill covered in oleander trees, facing the island of Ithaca and overlooking Sami Bay.
The monastery is dedicated to the Holy Virgin Mary, and it was here that the Saint Kosmas Aitolos taught. 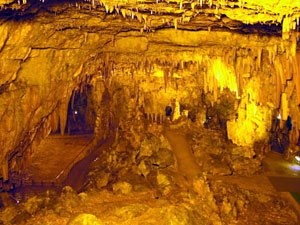 Nature is seen here in all its glory. In this magnificent-sculpted cave, no one can help but be impressed by the amazing stalagmites and stalactites, which have been slowly forming over thousands of years.

Beautifully lit, the cave resembles a fairyland as you walk down the 44 m. path that takes you to a huge “auditorium”; an open area of approximately 35 square metres.
Because of the marvellous acousticsd it is ideal for concerts, with the performers playing on a specially-created platform.

The dome of the cave is intact and is covered in fascinating shapes and textures. Drogarati Cave is a rear geological phenomenon, which attracts thousands of visitors every year.
There are numerous caves and underground lakes of varying sizes in the area that haven’t been opened up to the public for guided tours. The two of the largest are Agelaki Cave and Zerbati Cave.

BEACHES
Near Sami there are many beaches and small bays with crystal clear waters and the region’s lush green vegetation in the background. 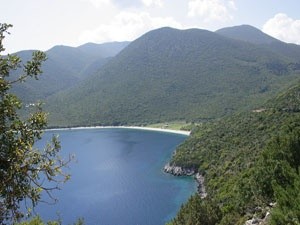 Setting off from the town of Sami in the direction of Antisamos, you pass many picturesque little bays, such as Paliouras, accessible either by boat or via a path.
Rounding the corner from Dichalia and beginning your descent towards the long beach of Antisamos, you will be struck by the many different shades of blue, green and white in the landscape that unfolds before you.
However many times you see it, the sight of this spectacular emerald beach from above never ceases to amaze.

The blue waters of the Ionian Sea wash the white pebbles, which in turn merge into the green slopes of the mountainside. Antisamos is not only one of the most beautiful beaches of Kefalonia, but of all the Ionian Islands.
It was no coincidence that the producers of “Captain Corelli’s Mandolin” chose it as one of the backgrounds for their film.

Agia Paraskevi (Saint Friday) beach
The beach of Saint Friday is the largest in a long line of picturesque bays along the road from Karavomilos to Agia Efimia in the neighbouring Municipality of Pilaros.
Access to all these beaches is particularly easy as the road runs right by the sea.
At each bend in the road you find natural shelter from the sun provided by olive trees with their “own” beach. The sand here is coarse and white and the sea clear and many delicate shades of blue. Just across the sea, you can see the island of Ithaca and the Patraikos Gulf beyond.

Sami-Karavomilos Beach
All along the shoreline from the port of Sami bound Karavomilos, is an endless stretch of sandy or pebbly beaches with crystal clear waters.

Paliouras
On the road to Antisamos, is a picturesque bay called Paliouras, accessible either by boat or via a path.