The region of Palliki occupies the western Peninsula of Kefalonia, with a population of about 6500 and area covering 145 sq Km, it has 14 Municipalities and 22 villages.
The terrain ranges from flat to hilly, with the valley of Katogi in the siuthern part, Which is the most fertile area of Kefalonia.
The northern part is called Anogi and is more mountainous.
Lixouri is the capital of Palliki, and is a modern town with a harbour, wide tree-lined streets and beautiful squares edged with flowers.
A river divides the town in two and the two parts are linked with small bridges.
The coastline of Palliki is characterized ny numerous capes and rocky promontories.
The western coastline is steep and rocky, and looks over the Ionian Sea, while to the east the coastline is softer and overlooks Livadi Bay.
There are fantastic beaches with crystal clear waters. 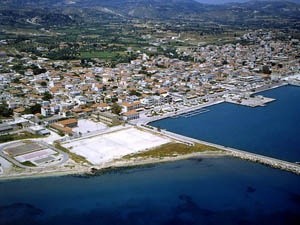 Lixouri, located on the peninsula of Palliki, is the second important town of Kefalonia, and boasts beautiful buildings, traditional small houses surrounded by flowers, beautiful squares with quaint cafes, and impressive churches.
Its most important sights include the two libraries, Iakovatios and Petritsios, with collections of clothing and rear books, the Philharmonic School, the bronze statue of the famous satirical poet Andreas Laskaratos at the port, the statue of Stamos Petritsis, and the church of Saint Haralambous.
A road leads from the village of Soullari to the beautiful beaches of Mega Lakkos and Xi, with its fine red sand and clear shallow waters

A short distance from the village of Mantzavinata and Xi beach, is Kounopetra (Moving Stone), a paradoxical natural phenomenon: a rock in the sea that moves rhythmicalally.
From Havdata you can drive to Kipouria Monastery, which houses remarkable relics and post-Byzantine icons. The monastery, perched on a cliff, has the most stunning views of the sea and the most beautiful sunset on the island. 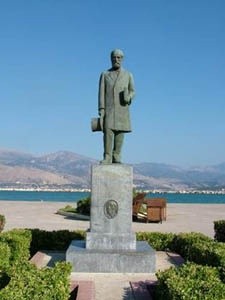 The region of Palliki is an integral part of Kefalonia and one that has played an important role in the history of the island. In ancient times the city of Pali, from which the peninsula takes its, was located here, and historians believe it was a colony of Corinth. It was almost certainly a stopping-off-point for the Corinthians on their way to their colonies in Sicily.
The peninsula of Palliki has connections with the Mycenean era, as well as being mentioned in the mythical stories of Homer. Various prehistoric finds have come to light during excavations in this area.
Historic buildings which have survived to the present day include the mansion of Doctor Geroulanos, the hospital, and the Valianos Professional School. There is also the Iakovatios Museum Library, which houses a total of 25000 books, the Petritsios Library, and the Philharmonic School of Pali, founded by composer Petros Skarlatos.
The statue of the satirical poet,Andreas Laskaratos, stands at the port to welcome those who arrive by sea.

Lixuri is the capital of Palliki and is the second most populous town in Kefalonia.
The official name of the town -Lixourion- was recorded for the first time in a written protest sent to the Venetian Senate in 1534.
The ancient city of Pali, which took its name from Palea or Pilea, one of the four sons of the mythical king Kefalos, was situated a short distance to the north of the present town, in an area known today as Paliokastro.
Lixouri is a modern town with a harbour, wide tree-lined streets and beautiful squares edged with flowers.
A river divides the town in two and the two parts are linked with small bridges. 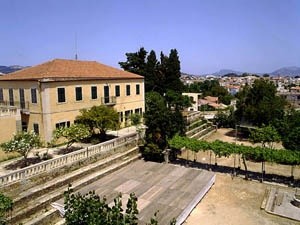 The Iakovatios Museum and Library is housed in the original mansion belonging to the Iakovatos family, which survived the earthquakes in 1953 and has been restored.
It is located in the western area of the town and consits of 14 rooms, with decorative ceiling panels and attractively-decorated walls.
The descendants of the Iakovatos family have donated not only the residence itself but also 7.000 books, one of the oldest being the Omnibus edition of Hippocrates published in 1595, approximately 1000 booklets and papers, as well as records covering the complete family history.
In the same building there is also an extremely valuable art collection.
There are 36 historically-important icons, of which two portable icons are worth mentioning: “The Gathering of the Angels”, the work of the monk Philotheos Skoufos, and “the Miracle in Hones”, by Michail Damaskinos.

The Museum also has on display three manuscripts of the Gospels dating from the 10th, 14th and 15th centuries, as well as vestments and hand-written books belonging to the Archibishop of Stavroupolis and teacher of the Theological College of Halki, Kontstantinos Tipaldos Iakovatos.
The same library also has 5.000 books that belonged to the Professor of Theology at the University of Athens and academic, Amilkas Alivizatos.
The total number of books, both donated and bought, comes to over 20.000.To the south of Lixouri can be found the villages of Michalitsata and Lepeda, which are enchanting places for a holiday with their picturesque coastline, sandy beaches and crystal-clear waters.
In Lepeda there is an old monastery in which resided the monk and intellectual Anthimos Kourouklis, who was decreed a saint recently by the Orthodox Church.
On the northern outskirts of Lixouri the ruins of the ancient city of Pali, which reached its peak in classical times, have been excavated.
The coins of the period depicted the head of Persephone wearing a wreath of maize; the hero and king Kefalos; and Pegasus.

The hill where the ruins of Pali are located is called today Douri or Paliokastro.
The main road heads out of Lixouri in a north-westerly direction. After a while it intersects with a turning on the left, which goes towards the south-west and the charming villages of Kaminarata, Favatata and Havdata.

The village of Kaminarata boasts an internationally-known traditional dance group that has won prizes both in Greece and abroad.
In the church of the Holly Apostles in Havdata there is a carved wooden icon-screen and post- Byzantine icons.
Two kilometers to the east of Havdata you come to the monastery of the Holly Apostle, Koronatos, with a nuns’ retreat set in delightful surroundings.

From Havdata the road takes you south to meet a smaller country lane that crosses the westerly region of Paliki (and therefore the west side of the whole island), which leads to the old monasteries of Saint Paraskevi Tafion (also known as Tafios or Tafi from the Mycenean name for the first inhabitants, the Tilevones or Tafi), and the monastery of the Virgin Mary of Kipouria or Kipouraion.
The view from here over the Ionian Sea is stunning. Nearby, there is a cavern known as Drakospilia (Dragon’s Cave).

This road, after the turning that leads to the two monasteries, continues to the south and enters Havriata, a beautiful village built on a hill, with panoramic views of the plain in the southern part of Palliki and which looks towards the sea.
It is the birthplace of the teacher Vikentios Damodos. The church of the Virgin Mary in Havriata houses beautiful religious paintings and a remarkable wooden icon-screen.
At night, to the West, you can see the lights from the lighthouse Gerogombos, which is a ten-minute drive from the village.

Near Havriata in Palati Boros, is the villa of the writer Ilias Tsitselis, who wrote “Kefalonian Varations” (Kefalliniaka Symmeikta), and whose valuable archives have survived in excellent condition. The surrounding countryside is delightful.

The nearby beach of Potami (“river”) has clean sand and beautifully-clear waters.
To the south-west a narrow road leads to the lighthouse of Gerogombos.
The road from Havriata continues to the south-east, passing through the village Vouni and from there into Manzavinata, where there are murals in the church.
A small road goes from Manzavinata in a south-westerly direction to the southern most tip of Palliki, to Akrotiri (Cape) where there is the famous moving stone, Kounopetra, one of the strange geological phenomena of Kefalonia.
Opposite Kounopetra, to the south-east, lies the small island of Vardiani.

A drive of 3 Km along the road from Mantzavinata brings you to the enchanting Xi beach.
This sandy beach stretches for nearly 3 kilometres along the shoreline and has fine red sand and clay cliffs.
The main road from Mantzvinata passes in a north-easterly direction through the village of Soulari and leads back to Lixouri.
It is known as the “lower” road, as opposed to the “upper” roads running through the north of the peninsula.
In the church of Saint Marina in Soulari, there are remarkable icons painted by Th. Poulakis and I. Moshos.
South of Soulari is a small bay with Venetian name, Mia Lako (Mega Lakos) with a beautiful sandy beach and clear waters that attract both Greek and foreign visitors.
The main road, after the turnings for Favatata and Havdata, leads to the villages Monopolata, Kalata, Saint Thekli, Vilatoria and Vovikes.
Between the villages of Vilatoria and Vovikesthere is a turning to Petani Beach, an amazingly beautiful beach.
The main road leads on to the enchanting semi-circular village of Kontogenada, whos