Although the Community of Omala is small, it has a great deal to offer visitors to the area.
Don’t miss seeing the monastery of Saint Gerasimos,the patron saint of the island, and the picturesque villages of Fragata and Valsamata. While you are there, sample the excellent, locally-produced Robola wine. 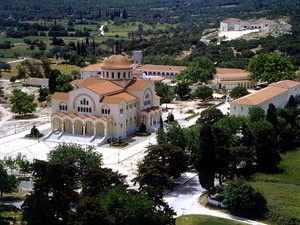 THE MONASTERY OF SAINT GERASIMOS
Agios Gerasimos is the patron saint of the island. hIS relics have been preserved in the monastery which is located in the region of Omala, .
Before 1554 the monastery was dedicated to the Virgin Mary. Gerasimos Notaras, a monk from Trikala in Corinth, converted it into anunnery after 1560.
Every year, in memory of the saint, two big festivals are held; one on 16th August (the day of his death) and one on 20th October (the day they recovered his relics).

Pilgrims from all over Greece come to pay homage to the saint’s miraculous relics.
On these two days, there is a procession of the relics from the church to a large plane tree almost 500m along the road, where there is a well that the saint dug with his own hands.
Despite the fact that a new church has been built, the old church is still in existence. It was built over the cave where the Saint led an ascetic’s life, and you can see various objects belonging to him in the old church.
Saint Gerasimos died on 15th August 1579 and the Patriarchate canonized him in 1622. It was October 20th 1581 when they discovered his body intact and they say it “gave off a pleasant smell 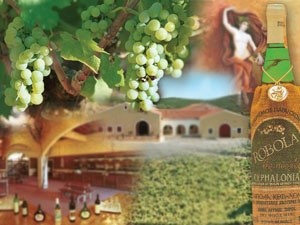 The Cooperative wine factory is located in the Omala valley, 700 metres above sea level on the slopes of beautiful Mount Ainos and next to the Monastery of Saint Gerasimos, the patron saint of the island.
The wine factory has been in operation here since 1987, and is one of the most up-to-date small-scale wine factories of Greece. It is in the centre of the Robola grape region, and is surrounded by nearly 1000 choice acres of sloping and flat vineyards, with soil and climatic conditions that are ideal for growing the Robola grape.